When the entire Source Family moved to San Francisco in 1975 some members went out trying to make money any way they could.  Tim Garon started singing and playing with a couple of other musicians Les Adam aka Rhythm and Alicia Previn aka Lovely.  Like Tim, Les Adam was also an extremely prolific songwriter, and so they began playing and singing together performing both Tim's songs and Les's.  Alicia played violin and provided background vocals.  The three of them would play on street corners and parks busking for money, along with selling jars of honey.  When Jim Baker heard the three of them together, he saw a moneymaking opportunity and on the suggestions made by Octavius, who was also the drummer for Yahowha 13 and for every other musical combo that formed within The Source Family; the decision was made to add Octavius on drums and Sunflower on bass guitar to form another in-house band called Breath.

Octavius also put together the studio in the basement of the Atherton manse and recorded the demo tape that was presented to record companies.  Breath rehearsed and recorded in the basement studio that was created at the old Atherton Mansion, where the entire family was living at the time.  A couple of A&R guys had been solicited to come to the house and listen to Breath, in the hopes of securing a recording contract.  But, after Father Yod was told by A&M Records that they would only be willing to sign recording contracts with the individual band members and not with The Source Family, he put the kibosh on the whole thing.

Most people would wonder why the band members wouldn't have gone ahead and signed a record deal! But, you see this is the degree of indoctrination or brainwashing that happens within a cult where individuals stop making their own rational choices and decisions, but rather obey those of the cult leader which is exactly what happened when Jim Baker said no to Breath having a recording deal!

Tim and Les lost what might have been a wonderful opportunity in their lives, by submitting to the decision made by their 'earthly spiritual father', Jim Baker a man who maintained a tight control and dominance over every single major decision in the lives of the people in his 'family' which in the case of Breath meant giving up a recording contract with A&M Records!  Who does that kind of thing? Who fiddles with and interferes with individual lives just because they believe they are a great, spiritual master or 'father', which was the case with Jim Baker.  I use the term 'father' loosely, because a real father would have wanted to see his children succeed and prosper, even if perhaps it meant them leaving the 'family', but no, Jim Baker did not want to lose control of a resource that he might be able to exploit at a future date.

So, Tim and Les acquiesced to the decision made by Father Yod, because he would have rather seen them singing and playing on street corners selling honey, rather than having a recording contract. Breath performed in public a few times and they were featured in a Christmas special that was done in 1975 at a local television station in Hawaii https://youtu.be/axvf0xSohec (that video clip plays during the credit roll of the 2012 film), and in 1976 they were one of the opening bands for Sly and The Family Stone at a Diamond Head Crater Festival on New Year's Day, and for Bread at The Hawaiian International Convention Center.  Although, none of the original master recordings of Breath survived and the band just became a footnote in the music that was produced during The Source Family.  A couple of cassette tapes of Breath did survive, although the sound quality is subpar, but I've included a few of those tracks.

I would also like to add that I have never been allowed to have a copy of the Christmas special video of Breath performing Tim Garon's song, Woman Beyond The Sun to have for Tim's son (our son) to have of his Dad performing, because the person who has the video in their possession refuses to allow me to have a copy out of spite. 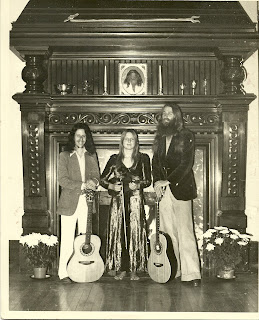 A photo of Tim Garon, Alicia Previn and Les Adam standing in front of the fireplace at The Atherton Manse in San Francisco, Ca 1975. 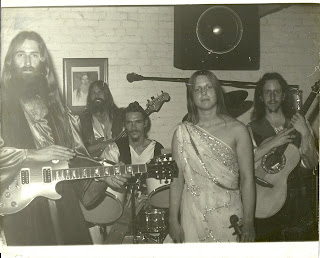 Photo of the in-house band called Breath taken in the basement of The Atherton Mansion circa 1975 in San Francisco, during what was the only recording session of the band, who were making a demo to present to record companies in the hopes of securing a recording contract for the band.  Breath performed the songs of both Tim Garon and Les Adam.  Left to right featured Les Adam (Rhythm) on lead guitar & lead vocals, Patrick Burke (Sunflower) standing at the back on bass guitar, Chris Johnson (Octavius) on drums, Alicia Previn (Lovely) on violin & backup vocals, and Tim Garon on rhythm guitar and lead vocals. 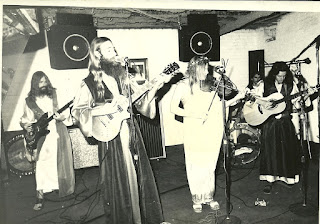 Breath during what was their one and only recording session taken in the basement of The Atherton Mansion San Francisco circa 1975. 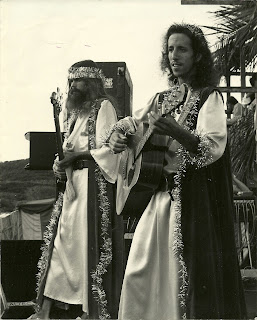 This photo shows Tim Garon in the foreground bedecked in tinsel and Patrick Burke (Sunflower) on bass guitar in the background. 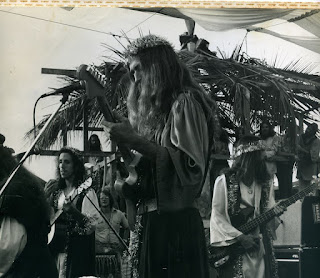 The above photos were taken in 1976 when Breath were one of the opening bands for Sly and The Family Stone at a Diamond Head Crater Festival.  I believe it was New Year's day.  Les Adam (Rhythm) is seen in the forefront on lead guitar and vocals performing one of his songs, and Tim Garon (Aladdin, Hom) is seen off to his left (facing the photo). 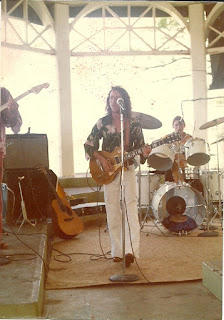