The Liberation of Death

I had all but forgotten about one of the most horribly stressful things that happened to me while being in The Source Family at The Father House---a house where the entire group was moved located in Nichols Canyon adjacent to Hollywood.  I had flown back to Los Angeles, after having given birth to my son in Honolulu at The Pagoda Hotel where my son's father and I had been staying, after we had both been kicked out of the family from the encampment at Makawao, Maui---the encampment where I had been sent along with the other pregnant women and women with children.  I do not recall the circumstances of why either Tim or I were told to leave, but I willingly chose to go with him to escape the awful and dire conditions at the camp.  Anyway, shortly after Tim and I arrived in Honolulu; I gave birth to our son in The Pagoda Hotel.  Tim went out playing bars and clubs in order to earn money, and we had hoped to have found our own place to live, by the time our child was born, but it didn't work out that way.  I ended up giving birth in a hotel room and my son's father delivered our son.  But, that is a whole other story.  Within weeks of delivering my son; I decided to return to the rest of the family in Los Angeles with my newborn son, leaving Tim to follow later.

One day, at The Father House, my infant son began running a very high fever----he felt extremely hot and would not stop crying. I was frantic and unsure what to do, so I decided to wrap him in a cold sheet again and again, in the hopes of bringing his temperature down and although wrapping him in that cold sheet over and over again and watching him scream and cry was one of the most difficult things that I've ever had to do, in my life.  But, I was determined to do whatever was necessary to help my son.  If I had to walk down the driveway and flag a car down to ask someone to drive me to an emergency room----that was something that I was prepared to do.  But, thankfully my son's temperature dropped and he started doing better, but other infants didn't fare as well at The Father House.

My feeling is that Jim Baker's belief in The Source Family not seeking or using medical help or treatment had the most detrimental effects on the entire group, especially on some  infants, who were born while their parents were in the cult. I still find it very difficult to understand how a man who was the spiritual leader of an entire group of people who some saw as being a highly evolved human being capable of immense love and compassion, and as being the wisest of men could be so accepting and nonchalant when babies were in distress under his watch. It is still difficult for me to comprehend even now forty years later how Jim Baker could sit relaxed, laughing, eating doing all of the normal everyday things that he did surrounded by his adoring women, while somewhere nearby an infant was crying continuously in dire distress.

Not seeking medical attention is alarming in any large group of people living in extremely crowded conditions, although not unusual in other religious groups, sects or cults who shun using modern medicine opting for 'faith healing' or 'self-healing', along with being passively accepting if death was the outcome of not using medical intervention of any kind.  Father Yod repeatedly referred to death as 'liberation' and "leaving the body' as if it were to be welcomed and even embraced.  But for me, it is one thing if a fifty-year-old man makes the decision not to seek or use modern medicine or assistance of any kind, but it's an entirely different thing when those decisions are imposed on the helpless such as babies and small children.  Jim Baker's belief in the entire Source Family to not seek or use any outside medical help was the most disturbing and detrimental aspect of his entire belief system.  One which, of course cost him his own life in the end. 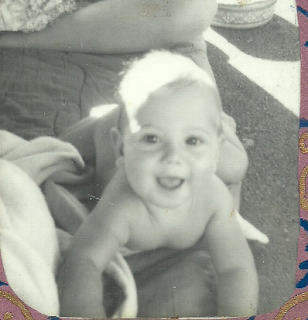 One of the few baby pictures that I have of my son.  I came away from The Source Family with only a couple of photos of my son from when he was a baby which is one of the disadvantages of being in a cult and not owning a camera.  Someone snapped this one when we were sitting out back at The Father House not long after I had returned with my infant son from Hawaii. 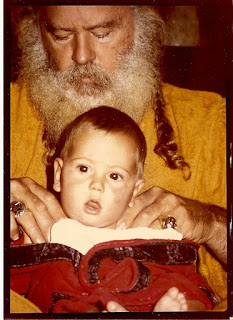 This is the only time that Jim Baker ever really paid attention to my son or held him, but thankfully someone who was allowed to have a camera snapped this photo for me to have, otherwise I would have only one photo of my son as a baby.  Everyone who joined The Source Family was given a new name.  My son was initially given the name Brother, but then it was later changed to Heavy.