The only redeeming thing about my joining The Source Family, was that I met my future husband, lifelong best friend and father of my child, Tim Garon.  Tim was also the first singer/songwriter to join The Source Family.  It was Tim's music that entertained everyone in the very early days of The Source Family, before Yahowa 13 was formed and where all attention and publicity was then focused.  Tim only contributed two songs to any of the albums that were produced, although he received no album credits for either of those songs.  Tim wrote the song Every Morning which was performed by Robin Baker (Ahom), because it was one of her favorite songs, and because they would often sing together and so Robin was recorded singing Every Morning and it was included on the 1974 album titled All Or Nothing At All----an album that featured some of the individual songwriters, singers and musicians of The Source Family and a departure from the Yahowa 13 albums.

Although, Tim was not given any songwriting credit on the All Or Nothing At All album for his song Every Morning, but then credit also wasn't given to a few other people who wrote songs or performed on that album.  That's because everyone was expected to 'not to be attached to the fruits of their labor' in The Source Family; which meant that recognition for your work or contribution went unnoticed and uncredited and which is why now 40+ years later; Tim and others have still not received the recognition that they sorely deserved back then and now.

Tim also wraps up the album To The Principles: For The Children (Side B on a Yahowa 13 album) with his song Oh, Yahowha which features him playing guitar and singing with the children who were in the family at the time accompanying him, although again Tim received no credit on the album for that song.  So now, forty years later several of the singers, songwriters and musicians continue to remain in a faceless and nameless anonymity, because of their songs and musical contributions being licensed, marketed and sold as either Father Yod and The Spirit of '76 or just labeled Source Family music.

I also wanted to add that many of the nameless songwriters and musicians never saw a single dime for any of their songs or performances, from when they were in The Source Family.  Singer/Songwriters like Tim Garon and Les Adam, who contributed more to the entire volume of Source Family music than most with his exceptional songwriting playing both electric and acoustic guitar, electric keyboards and piano and vocals, and yet like Tim---Les Adam never received compensation from the sale of any of the albums that feature his songs or his performances!  There were three songs written and  performed by Les Adam that were used in the 2012 film about The Source Family:  Take A Ride (although songwriting credit was incorrectly given to someone else), Party Song and Woman were also used in the film---two songs written and performed by Les, although no credits whatsoever were given for either of those songs!  Les Adam has four of his songs on the album All Or Nothing At All:  Take A Ride, Party Song, Woman and a bonus track of his titled Hurry Home.  On the album titled Savage Sons of YaHoWa, two of Les's songs were used; Edge of A Dream and Red River Valley, also he is probably playing piano on A Thousand Sighs.  Les more than likely was also playing either guitar or piano on most, if not all of the tracks on both albums and yet received no album credits whatsoever!  It's hard to believe that could actually happen, but all of the singers and songwriters and musicians were expected to be unattached to their creations and so the individual contributions of musicians were omitted for two reasons:  1) because it was viewed as being in your 'personality' to want individual credit or acknowledgement for your musical contribution 2) because the music being made at the time was all about promoting 'Father Yod' and was to be seen as a commodity put out by the entire Source Family in an effort to generate income----just not for the recognition of anyone's individual talent.  Les Adam died a few months ago never seeing one cent from all of the musical contributions that he made, during the brief years he spent in The Source Family. 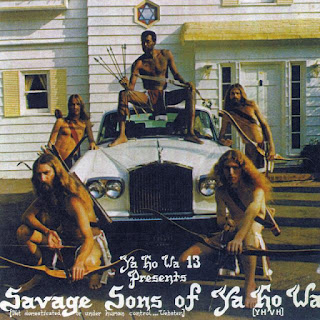 Album cover for Savage Sons of Yahowa where Les Adam (known as Rhythm) is seen crouching on the left side of the Rolls (facing the photo) taken in front of what was called The Father House, because Father Yod left the room above The Source Restaurant where he had been living with his legal spouse, Robin Baker; deciding to move into an upstairs bedroom to accommodate the bevy of other women he was acquiring around him and to live with the rest of 'the family'.  This album includes songs written and performed by Les titled Edge of A Dream and Red River Valley, and more than likely guitar or piano performances on the other album tracks.

Album cover for To The Principles: For The Children made during the flurry of recording done circa 1973 when the entire group was living at The Father House located in Nichols Canyon in Los Angeles.  Tim performed the last song on the B side of this album singing his song titled Oh, Yahowha accompanied by some of the children pictured in this photo.  Jim Baker is seen exiting the front door of The Father House in the white suit purchased for the series of publicity photos taken to promote The Source Family and the albums being produced at the time all in an effort to attract new members by giving the appearance of a wealthy, affluent group. 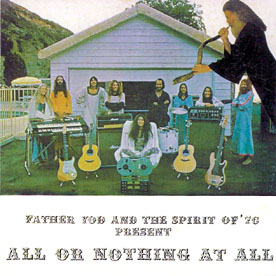 Album cover photo taken in front of the garage or band room of The Father House, where Tim either did not want to be photographed or was not included, because his version of the song that he wrote titled Every Morning was not micced very well and so Robin Baker (Ahom) performed the track that was used on the album. 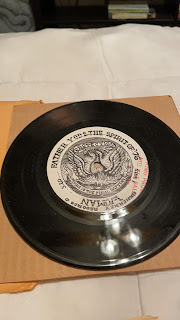 Above photo of the 45 single of Les Adam's (Rhythm's) song Woman that was a bonus track on All or Nothing At All.
Here is the outtake of Tim performing his song Every Morning that was not used on the album, with Les Adam on piano.
Posted by Laura Garon at 2:30 PM