One of the biggest regrets that I have from being in The Source Family was when I had to submit to registering my son's name on his birth certificate as being Heavy Aquarian, along with not being allowed to put down his own father's name, Tim Garon.  That was because all the women who had given birth in the group (1974), were made to apply for birth certificates for our babies on Kauai using the last name Aquarian, so that the women could apply for welfare assistance to bring in more money for the group.  It was something that did not sit well with me and I was against doing, but I felt at the time that I had no other choice, and was coerced into doing.  But, I deeply regret that I didn’t refuse to submit to that directive, and didn't just leave at that point. I was completely indoctrinated by then, by going along with and saddling my son to go through life with a birth certificate that reads Heavy Aquarian, along with it not showing that his biological father was Tim Garon.

It has been my intent to someday return to Hawaii for the sole purpose of petitioning a court or judge to correct my son’s birth certificate.  What an embarrassment it has been, especially after we all dispersed and having to go out into the world and present my son’s Heavy Aquarian birth certificate!  Although, after Tim and I were legally married we legally had our son’s name changed, but his birth cert still reads Heavy Aquarian.

The situation on Kauai became extremely dire, without the income generated by The Source Restaurant that had once supported the entire group and so either Father Yod or one of his women came up with the idea of the women with babies who had been born in the group going en masse to the county offices on Kauai and applying for birth certificates all using the last name of Aquarian, so that we could then apply for welfare that would pay for airline tickets for the entire group to leave the island. I never actually saw one of these welfare checks, if indeed any were collected. I recall feeling a sense of coercion at being commanded to do this, and going along in reluctance with the rest of the women that day, as if we were a merry group, but throughout the years whenever I have reflected back on that episode; I have felt nothing but immense regret for allowing myself to go along with that directive and remorse for saddling my son with such a thing.

The days on Kauai were very tumultuous and uncertain fraught with an unsettling, unease and fear of some kind of attack from the outside. Those were extremely distressing times in The Source Family.  I must admit to having been completely indoctrinated by then and incapable of leaving which would explain why I remained and endured the even worsening conditions at The Hilo Country Club and The Doc Hill mansions on the Big Island. The definition of brainwash is the following: "to effect a radical change in the ideas and beliefs of (a person), especially by methods based on isolation, sleeplessness, hunger, extreme discomfort, pain, and the alternation of kindness and cruelty.  Although, we usually equate the idea of being brainwashed as something that was employed by the Gestapo; it is essentially what happens when a group of people sit together in a meditative state each and every day listening to the soft, hypnotic words and edicts of someone who is viewed as either your spiritual father, leader or guru. A kind of hypnotic state takes place which induces a surrendering of ones ego to that one individual accompanied by a compliant belief in their words along with giving a heightened sense of belonging or ‘being part of something special." That is what happened to me and why I remained for six years in The Source Family.

I had surrendered my personal autonomy and individuality by willingly adopting and acquiescing to Jim Baker's worldview or 'transcendent belief system' integrating and replacing it with my own, because this is how cults form around one central person or leader, at which point anyone in a cult submits their own will to the will of the supposed 'divine leader', and in this particular cult it was the will of Father Yod and the women surrounding him who influenced his decisions.

In retrospect, I realize that I have only myself to blame, though for allowing myself to submit and be directed and misdirected which is why I am adamantly against anything or anyone who tries to promote Father Yod and The Source Family as being some kind of ideal utopian "Aquarian" uber group and presented to the public as something to aspire or copy.  Especially for young women who need to know that Father Yod saw the role of women as a servile, docile and obedient one.  Jim Baker believed that a woman's role in life was only 'to serve and inspire a man' which meant 'serving' a man (or son, as they were called in the group) which meant doing everything from making his meals, to doing his laundry, making clothes for him, giving him foot and body massages and obeying his every command, but most importantly in performing 'sex magic' with him, as devised and directed by Jim Baker.  So, the role of a woman in The Source Family was not something that I feel any young woman should want to aspire or duplicate and that the role that Jim Baker imposed on the women who were in The Source Family, in my opinion set back the rights of women by a hundred years or more, nor would I ever want my own son to ever give up his personal power to one person or follow them in any kind of humbled obedience or submission. 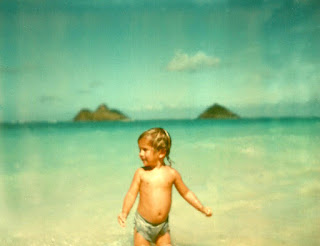 This is a photo of my son at Lanikai Beach, considered a place of numen, by Father Yod's/Yahowha's most entrenched followers located on the windward side of Oahu taken right after The Source Family dispersed.

I recently ran across this article in a local Kauai newspaper. https://www.thegardenisland.com/2018/10/28/lifestyles/the-hippies-of-kauais-keapana-valley/?fbclid=IwAR2gBgA42seNw1Zk-_DFoP0hj6WHg4IzapuQiBArDewEJP-c1fAD0WQ9JNg
Posted by Laura Garon at 8:07 AM