Group Photos That I Happened To Be In

Although the person who claims that every photo taken during The Source Family belongs to her; I wanted to post the ones that are already found all over the internet, and where I just happened to be present.  It only seems fair that I am allowed to post and use photographs from forty years ago where I was present.  Many people were taking photographs and videos throughout the time that The Source Family was in existence, although one person claims that every single photograph belongs to her and her alone. 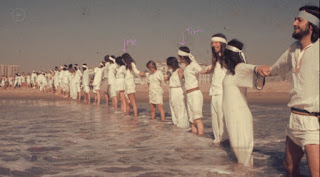 In this photo that is one of the most publicized, I was standing seventh in line from the end, with my son's father, Tim Garon fourth in line wearing a belt and a headband.  This was taken on the first 'family outing' where the entire group went en masse to Santa Monica Beach. 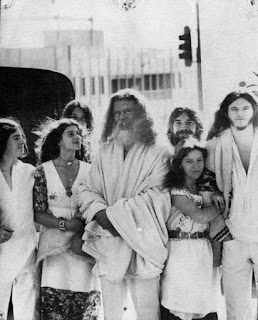 In this photo probably taken in 1970 on the patio of The Source Restaurant, not long after I had joined The Brotherhood of The Source (the original name); I am standing behind Robin Baker, who had recently legally married Jim Baker.  When I joined the group, Robin was referred to as "mother" and Jim Baker "father."  They were seen as the group's spiritual mother and father. 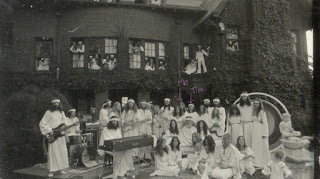 This photo was probably the first group photo taken on the front lawn of what was called The Mother House, the manse that we all occupied located in the Los Feliz neighborhood of Los Angeles.  I was standing just behind my son's father, Tim Garon who was standing directly behind Jim Baker, also wearing a headband.  I refused to wear either a headband or headdress; something that Father Yod did in the early days and most everyone copied or emulated whatever he did. 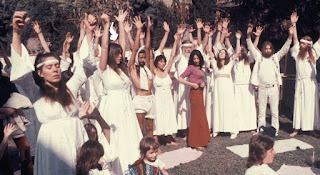 This was a group photo taken on the front lawn at The Mother House.  I was standing in front dressed all in white with my hands raised (ha ha ha). 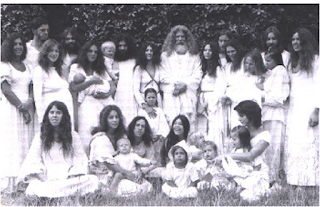 This photo was taken at The Mother House located in Los Feliz.  I was sitting on the lawn on the far left (facing the photo) in all my chubbiness wearing a dress that I had made from the white homespun fabric that many of us used to make clothing and meditation shawls that could easily be fringed at the hem, due to its woven nature. 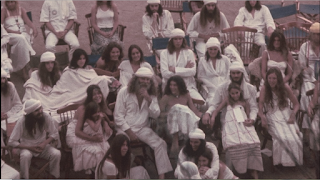 In this photo taken during one of the Sunday outdoor concerts held in the dirt parking lot of The Source Restaurant, I am sitting at Jim Baker's feet.  We were all looking at and listening to my son's father, Tim Garon singing and probably laughing at something that he had just said. 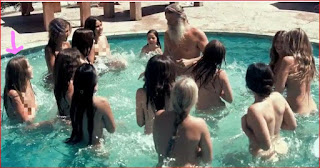 In what was probably the most embarrassing photo to have found myself in, this one was taken in the pool located at The Father House when I just happened to be in the pool with a few other women, when Jim Baker showed up with the entourage of women who followed him everywhere.  I am standing on the very far left (facing the photo); thankfully our breasts are blurred out!  Yikes! 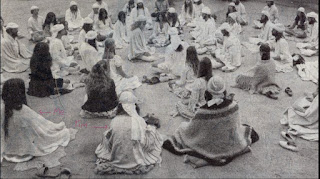 In this photo, I am sitting on the very far left (facing the photo) with my son's father sitting to my right wearing the requisite headdress looking rather slumped over probably because he was having a hard time staying awake!  For a brief time, morning meditation or 'class' as it was called, was held outside in the dirt parking lot of The Source Restaurant located right on Sunset Boulevard, so it created quite a scene. 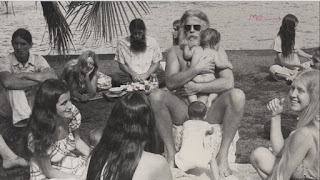 This photo was taken sitting out back at the Doc Hill mansion located in Hilo, on the Big Island.  I was sitting off to the side with my own son, who was not quite in the photo, behind Jim Baker.  This was taken not long before he left for Oahu with his entourage of women and his three babies, to escape the dire conditions of what life had become in The Source Family.  There was barely enough food to eat when we were at Doc Hill, which for some malnutrition became a real threat. 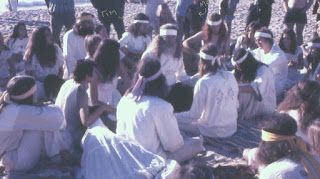 This was taken during one of the few trips where the entire group went to Santa Monica Beach.  My son's father, Tim Garon was sitting behind Jim Baker holding a guitar.  I was sitting off to Tim's right (facing the photo). 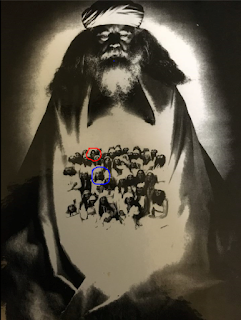 This photo of family members inside of Jim Baker's stomach (to convey the idea of him 'giving birth' to us all) was one of the first & earliest photos taken as a group that was used as a poster for a 'source family' concert put on to promote 'the family' and hopefully attract new family members.  The turnout for this concert was very low.  As usual, I was standing at the very back my head circled in red. Tim Garon (Aladdin) is circled in blue.  At the time, Yahowa 13 had not been formed yet, so the only entertainment was Tim performing/singing accompanied by a couple of other 'family' musicians.  This was during the time when Jim Baker wanted to wear a headdress; a carry-over from his time spent with Yogi Bhajan; so family members were expected to copy/emulate whatever he did. I refused to wear that head wrapping and thought it was dumb.  I was not a good little follower in many regards.  Here is a live recording of Tim performing his song The Illumined Ones at the first concert held at the Wilshire-Ebell Theatre, which unfortunately contains some static sounds at the beginning and end of the track (artwork by Emily Balivet). 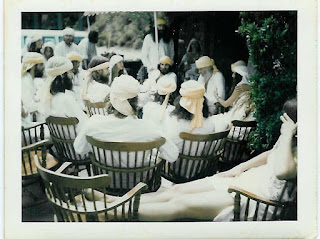 This photo was taken on the patio of The Source Restaurant in the early days when we all wore only all-white clothing, and Jim Baker wanted everyone to wear turbans that were a hangover from his days spent with Yogi Bhajan.  I am in the foreground resting my legs on a chair sitting behind Tim who was wearing a yellow turban.  It was always quite a spectacle seeing this group of people all dressed in white sitting around an older bearded man right on Sunset Boulevard. 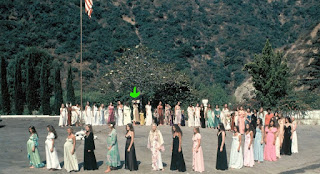 This parading all of the women around the flagpole was part of the series of publicity shots taken to promote The Source Family and was taken out front at The Father House located in Nichols Canyon in Los Angeles.  Jim Baker wanted to 'give the appearance' of being a prosperous, well-to-do group (hardly).  I was standing tenth in line from the end in a borrowed dress several inches too short for my frame, with my arms raised out of sheer boredom from having to be paraded around.  But, we all did what we were told to do; as in any cult. 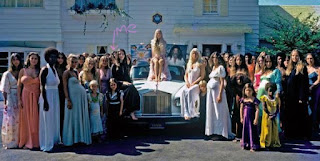 And last but not least the most widely seen and used publicity shot of the women sitting on and standing around the Rolls Royce (something that was acquired and used only briefly by Jim Baker) in order to give the appearance of wealth and affluence, in order to promote the Yahowa 13 albums and attract people hopefully with money and means.  I did not want to be in this photograph, and so only the top of my head is showing in the very back, which was fine with me; just to the left of Makushla's head, who is sitting on the front left of the Rolls (facing the photo).  Jim Baker wanted all of the pregnant women out front to give the appearance of a fecund group.  But, appearances can be deceiving, because we were all living in overcrowded conditions where outbreaks of staph were becoming more and more common, and where the stress and strain of the situation was beginning to show on the faces of the women.  Also, Jim Baker can be seen standing in the doorway of the house.