Photos of Tim Garon and Me 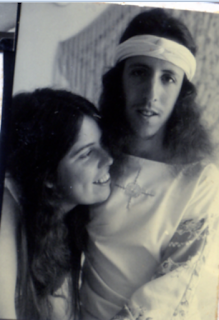 This was one of the only photographs taken of me and Tim right after we met and got together.  Here we were in what was our own room in the upstairs of The Mother House.  I had made the shirt that he's wearing from an old fifties tablecloth and embroidered something on the front.  This was in the very early days of The Source Family, before we both became disillusioned with the entire direction that Jim Baker took the group. These two small b&w photos were sent to me a few years ago, by another former member who had been holding on to these small photos for years and thought that I'd like to have them, after Tim died.  What struck me the most about these little photos when I saw them again; was just how much Tim and I looked like cult followers not only in our attire/garb, but also in our vacant stares---bringing back a flood of memories of just how indoctrinated we both became in our Brotherhood of the Source enculturation where we both became good, little obedient and compliant (most of the time) followers of Jim Baker and his 'aquarian' directives. 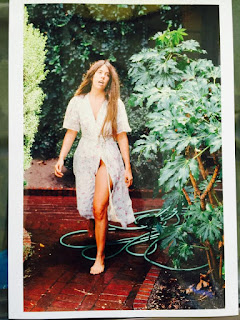 This is probably the only photograph that was ever taken of just me alone.  It was taken at The Mother House probably in 1971 when I was taking a young man by the name of Scott Enyart on a tour.  Scott was only a teenager when he came during the day for a week to do a feature story on Jim Baker and The Brotherhood of The Source and he took a series of photographs, this being one of those.  I look rather disheveled and a bit risque in my old vintage housedress looking a couple of sizes too small for my frame, but then after everyone stopped being paid for working at The Source Restaurant, nobody had funds to go out and buy clothing, with the exception of Father Yod's women.  Also, everyone went sans underwear in The Source Family, because it wasn't considered part of an "Aquarian" wardrobe.

I snipped this photo of me from a larger photo taken during a 'family' trip to Venice Beach in my cult 'beach attire'.  A few of the men/women fashioned loincloth swimwear, but I was still in a 'chubby' phase and not inclined to wear one of those.  My body language reminded me of just how enculturated I'd become in believing and obeying Jim Baker's directive that all women in The Brotherhood of The Source had to 'serve' one of the 'sons' ie men and behave in a submissive and attentive servile way.  Oh, the yucky memories this photo brought back for me! 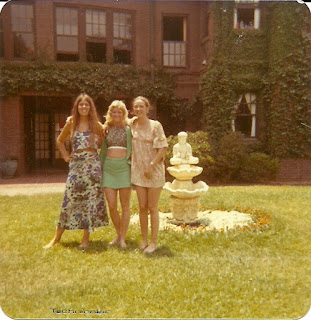 My sister just recently sent me this (very small) snapshot of when she came to check on me (visit) at the Los Feliz house dubbed The Mother House where I can be seen with her and her friend posing on the front lawn.  People's (real) family members could come and visit whenever they wanted.  This must have been summer of '72 after those who worked in The Source Restaurant were still being paid a wage (until we all moved in together) and where I walked up Sunset Blvd one day and bought a two-piece flowered outfit with my own money, because I was sick and tired of only wearing all-white clothing.  That was the last new clothing that I would have, until the cult ended.  I recall marching into the restaurant in a defiant way wearing my new non-white outfit and standing in front of Jim Baker who was sitting in his usual spot in the corner next to the window where he just looked up, smiled benevolently and said, "Ah, my wildflower" which was one of the few and only times that he ever addressed me directly in the entire six years that I spent in that damn group! 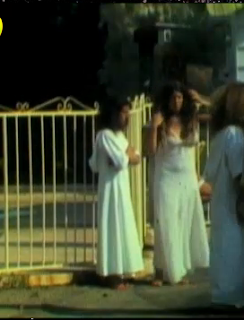 I snipped this from a video when Elliot Mintz came to The Father House to interview Jim Baker for KABC Eyewitness News in 1973.  Anyone interested, can watch the interview on Elliot's website, if they want to maneuver the labyrinth of his website at elliotmintz.com .  Tim's body language spoke volumes about his ever-increasing dissatisfaction with how The Source Family had become what he called 'a dog and pony show.'  This was when Jim Baker was aggressively trying to recruit new members. 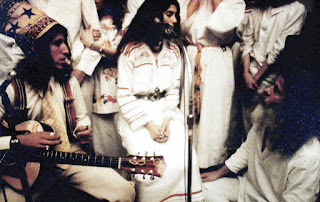 This was a photo taken at one of the first concerts where Tim performed and sang with Robin Baker; something that they did on a regular basis.  Tim was wearing the magician's hat belonging to Jim Baker, who was sitting on the floor looking up in rapt adoration at his newly wed bride, Robin.
Here is a track from an obscure album of Tim and Robin singing an Exuma song titled You Don't Know What's Going On.
I also found this link to a photo of the single.
https://rateyourmusic.com/artist/the_source_f9
B side of single featuring Tim's song Hummingbird.
https://soundcloud.com/laura-garon/hummingbird 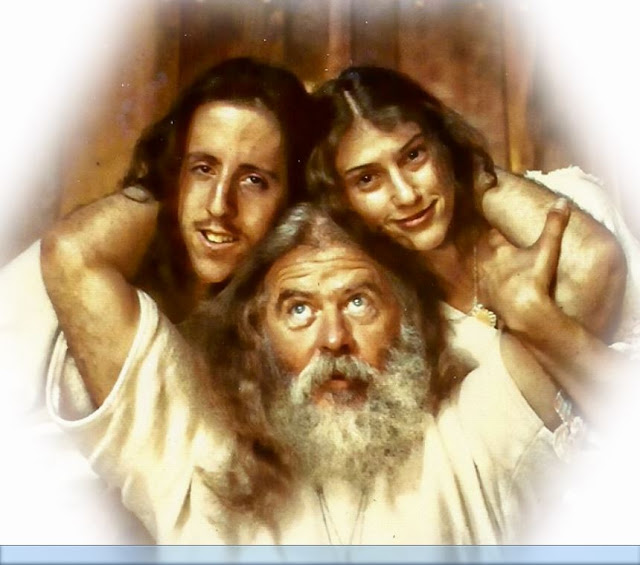 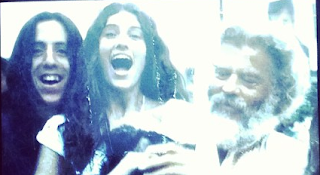 Although this photo was torn and in poor condition, it showed a happy and exuberant Tim next to Robin Baker, along with the attentive face of her husband, Jim Baker.  This photo was probably taken in either 1969 or 1970. 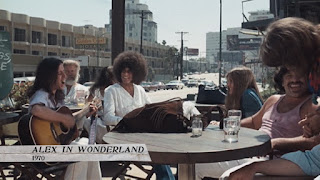 This was taken from the patio scene from the 1970 film Alex In Wonderland starring Donald Sutherland, where Tim is seen playing guitar and singing and where Jim and Robin Baker can be seen sitting in the background, as seen in this video clip https://youtu.be/BslYvlgMGQY.  Tim and Robin even appeared on The Gong Show and were not gonged, although they tied with another act.  I have never been able to find a video of their performance, though. 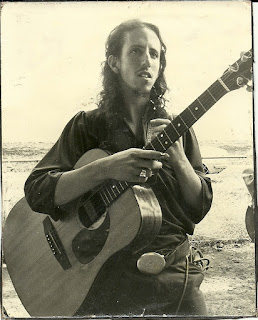 My favorite photo of Tim, from that time period.  I believe this was taken during the time the entire Source Family was travelling around the Bay Area. 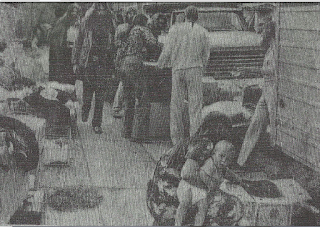 This is a grainy photograph taken from a newspaper article about The Source Family wandering aimlessly around The Bay Area for a time; and this photo happened to capture me bending down reaching into a box, holding my son.  I can honestly say that this time of being on the road was the most fun, because it broke up the monotony of the rest of the time spent in The Source Family, never being able to go anywhere or do anything.  Also, I got a used flowered hand-me-down dress that to me felt like getting something new.  But, the other reason that I particularly like this photo is because it also shows the imposing figure of Les Adam walking towards me.  Les passed away a few months ago, and was one of the kindest men. 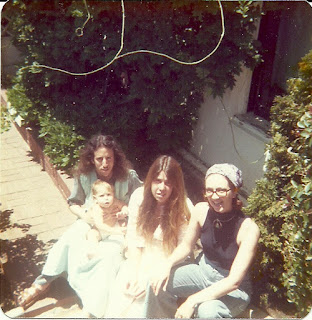 Another photo recently sent to me from my sister, seen smiling next to me sitting out front of the Atherton Manse in San Francisco where she came to check on me (visit) once again circa '75.  Tim is seen holding our son, Heavy.  Tim's and my expression can best be described as somber ambivalence from us having remained in 'the family' for so long feeling a disconnect from the rest of the world in what became an enervated existence.  Jim Baker would warn anyone who left his 'family' of the harm that might befall them; which is textbook cult behavior. 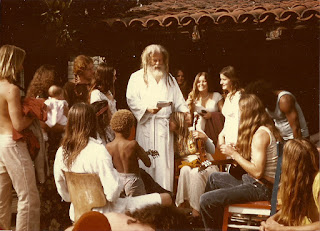 This photo was taken in Mill Valley when The Source Family was wandering around The Bay Area.  Tim, Alicia Previn and Les Adam were sitting around singing and playing when Father Yod came out to read something aloud. 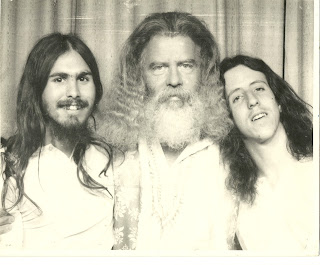 Tim with Damian and Jim Baker, in the early days of The Brotherhood of The Source. 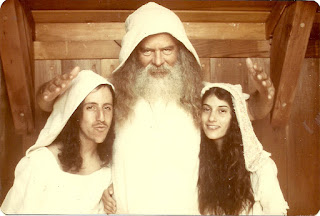 Tim with Jim and Robin Baker taken before Jim decided to acquire more 'spiritual wives'.  When Jim Baker decided to do that; Tim became really disenchanted with Baker. 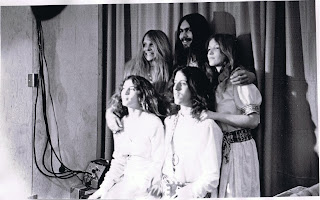 Early days in The Brotherhood of The Source with Robin sitting next to Tim in the front row.  Standing behind Robin and Tim was a young woman named Trisha, Damian and Blessing (Iris).  I believe this was taken at a health fair. 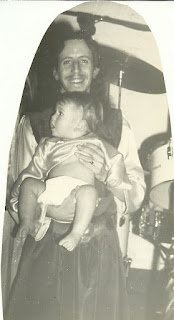 Tim holding our son.  Tim was an extremely proud father.  Jim Baker first gave our son the name Brother, and then later changed it to Heavy.  My son's birth certificate issued by the state of Hawaii read Heavy, until I did a legal name change. 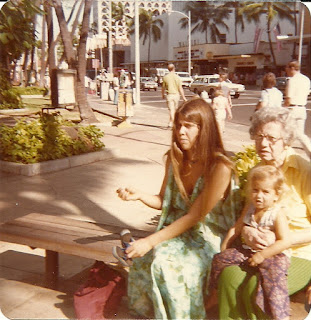 The above photo was taken in Honolulu March 1977 (my son was barely 3 years old), after The Source Family had disbanded; yet Tim and I remained living in the Kailua/Lanikai area as many former members continued to do, while each figured out what to do next in their lives.  Both Tim and I went by/used our Source Family names (Whisper & Hom) for a couple of years after the cult ended, as we both acclimated and adjusted to being back in normal society and were able to disabuse ourselves of the Source Family cult mentality/groupthink that some still desperately cling.

Here are a few tracks that Tim and Robin performed for a demo tape when Playboy Records were interested in them.  https://soundcloud.com/laura-garon/tim-and-robin