The Wacko World of Yogi Bhajan

I encourage anyone who is interested in learning more about Jim Baker and The Source Family, to check out The Wacko World of Yogi Bhajan forum; which in my mind is essential reading in order to gain a better understanding of the 'spiritual' tree that the apple, Jim Baker fell in wanting to create his own 'aquarian legacy' by labeling his own group of followers as being 'an aquarian tribe' having all of us adopt the surname Aquarian and on and on it went from there.  Jim Baker considered Yogi Bhajan his 'spiritual father' and so he is seen as the grandfather of The Source Family.   It is my view that to understand the mindset and belief of Jim Baker and why he started his own 'family'; one needs to learn more about his own 'spiritual' master or teacher.

It always seemed to me that Jim Baker was trying to outdo or impress Yogi Bhajan either with the amount of followers that Jim Baker had acquired, or with the music that was coming out of The Source Family.  You can hear Father Yod speaking on the Breath track Woman Beyond The Sun that I have posted saying, "Send this tape of this morning's class to Yogi Bhajan.  I love to blow that old yogi out."  To me, this sounded like a man trying to impress or outdo another.  Jim Baker adopted and integrated many of the kundalini yoga exercises that he learned while with Yogi Bhajan, as part of his 'teachings' in The Source Family, and so Yogi Bhajan was held in high esteem for being Jim Baker's 'spiritual teacher' and was to be shown the same respect and reverence as Jim Baker wanted to be shown.

It is my belief that in reading and learning about Yogi Bhajan, it will give people a better understanding of Jim Baker, because many of his actions and behaviors mirrored that of the Yogi.  But, where it turns out Yogi Bhajan secretly had a bevy of women referred to as 'secretaries' that he was sexually involved; Jim Baker trumped that by brazenly and openly having 'spiritual wives' in The Source Family.  Jim Baker believed that he had surpassed the Yogi by openly having sex with multiple women within his group; as opposed to the clandestine trysts carried out by Yogi Bhajan and I distinctly recall Jim Baker stating that.  They both seemed to share the desire for ostentatious displays of having wealth and affluence, although Jim Baker could only afford to acquire one used Rolls Royce, with the assistance of an older man who joined The Source Family.

So, Jim Baker set about trying to attract and bring in more lucrative prospects by 'putting on a show' and making an appearance around Hollywood.  But, it was all smoke and mirrors---an illusion, which is why I encourage anyone interested in how Jim Baker became a 'spiritual father' to learn more about Yogi Bhajan; the man who was considered the grandfather of The Source Family.  I have included a few of the statements written by a woman who remained with Bhajan for years where I found many of the same behaviors playing out in The Source Family.  Many of the same kinds of behaviors found in Yogi Bhajan's cult played out in The Source Family, especially in both men's behavior and treatment of women; similarities that cannot be ignored and give a much better understanding of Jim Baker and the acquisition of his own group of 'wives', or 'secretaries' as they were called in Bhajan's cult.

"Yogi Bhajan may not have been a great spiritual teacher, but there is no doubt that he was a master at acting like a great spiritual teacher."
"In just the same way, a cult leader like Yogi Bhajan cannot pull off his scam unless he captures the devotion and adoration of the women around him. Fundamentally, therefore, all black magicians are also gigolos."
"It was Yogi Bhajan's goal to make the women of his cult independent of all men except himself."
"As long as they played their roles devotedly, Yogi Bhajan's women were given a great deal of status, political power within the organization, financial security and lots of cool jewelry." 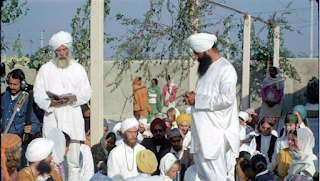 The photo above shows 'the student' Jim Baker emulating/looking exactly like his spiritual 'father', Yogi Bhajan.  This must have been about 1969, before Jim Baker left Yogi Bhajan to create/form his own 'aquarian' tribe of devoted followers calling it the Brotherhood of The Source. 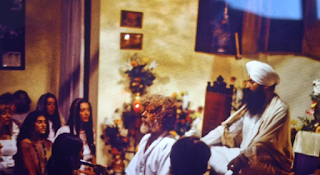 The above photo shows Jim Baker (aspiring pupil and disciple) sitting in front of Yogi Bhajan with a lovely and young Robin Popper sitting off to the side of her soon-to-be husband, before she/Robin proposed the idea of Jim Baker gathering his own flock of followers and creating their own spiritual group.  Robin helped Jim Baker to compose his 'Ten Commandments For The Aquarian Age' contained in the book they penned together titled Liberation, although she was removed/demoted from her place as 'spiritual mother' of the Source Family and replaced/displaced with another more desirable object of Jim Baker's desire and affection.  But, the makings of the guru, ersatz father-figure Father Yod/Yahowha is shown above in training sitting at the feet of his own spiritual teacher. 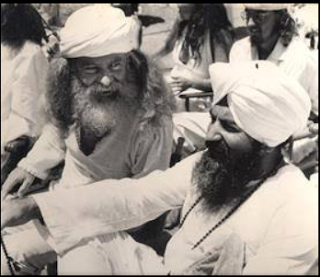 This photo was taken in the early days of The Brotherhood of the Source which was probably the only time that I can recall where Yogi Bhajan made an appearance.  This was outside in the dirt parking lot of The Source Restaurant, during an open 'family' concert.  Also, I just happened to be sitting in the row behind, that day.
I recently found this article https://www.lamag.com/citythinkblog/yogi-bhajan/.