This post is to pay homage to my son's father, Tim Garon for all of the wonderful music that he composed and performed throughout his life.  But, since this blog pertains to 'life in the source family'; I'm primarily reserving this post to that time in his life.  Tim Garon met Jim and Robin Baker at Yogi Bhajan's ashram in Los Angeles in 1969.  Tim's cousin, Shakti Parwha Kaur (Miriam Garon) was the Yogi's personal secretary, and so Tim began attending classes that were held at the ashram and after meeting Jim and Robin; his cousin Shakti got him a job washing dishes at The Source Restaurant.  Tim soon began referring to Jim Baker as 'father', as Jim Baker was just starting his formation of what would become The Source Family, with himself becoming its 'earthly spiritual father'.  Tim spent an entire year with Jim and Robin Baker, along with another man who also became a follower of Jim Baker, before anyone else joined what was initially called The Brotherhood of The Source.  But, as 'the family' grew, Tim found Jim Baker became more and more unapproachable, especially after he displaced and replaced his wife, Robin with so many other women.  So, Tim just came and went as he pleased as he watched what he considered a 'circus show' unfold around Jim Baker, because although Tim held an appreciative fondness towards Jim Baker; he could not stand the worshipful meiny that had formed around him.

Tim Garon was given several names, during the course of the cult beginning with Destiny, then Aladdin, briefly David and then finally he got stuck with the name Hom; a name that Tim could not stand. Supposedly the planets made their own individual sounds and Hom was one of those sounds, although I do not recall for which planet.  Tim Garon was also the first singer/songwriter to join 'The Brotherhood of The Source' where Robin Baker would often sing with him.  In the very early days of the group, it was Tim who entertained at every 'family' gathering.  But, as more musicians began joining eventually Yahowa 13 took center stage and garnered all of the attention and promotion, and Tim's voice and songs were heard less and less.

After the family ended, Tim wanted no affiliation with The Source Family, yet those promoting Father Yod and The Source Family continued to use and sell his music.  The argument of the two people who are selling Source-branded merchandise is that Tim had given them verbal permission to use his songs, as long as they did not use his real name.  But, the thing is that Tim died in 2008, and the film which features two of Tim's songs was not released until 2012.  Logic and common decency or even courtesy dictates that those two people should have reached out and contacted Tim's heirs to either ask permission or just given a 'heads up.' But neither was extended to either me (his former wife), or Tim's son and heir (our son).  So, when the film was being unveiled at SXSW in Austin in 2012 someone called me from the event to tell me that two of Tim's songs had been used, along with video footage of Tim performing his song Woman Beyond The Sun; all unbeknownst to me or his/our son.  The two individuals leading the charge in the revival of Father Yod and The Source Family could have easily reached out to me via either email or a phone call, because I had been contacted to ask if I wanted to be interviewed for the documentary and yet not one mention ever of their intentions of taking, using and selling Tim's music.

Tim's son does not receive one dime from the sales of either of his Dad's songs used in the 2012 film and soundtrack album, or from his songs on Yahowa 13 and 'Father Yod' albums, because again it goes back to the arrogant and imperious 'sense of entitlement' that some former members feel they have to just take, license and sell whatever they want with little or no compensation going to the individuals whose songs and music they have been so freely licensing!  This is the most disturbing aspect of two people's appropriation of the entire story of The Source Family---two people who behave as though the entire story/narrative belongs to them, along with anything that was created during the time that we all lived together making it their own property, especially all of the music that was made.  My only recourse is to hire a music attorney or sign new licensing agreements with a new set of individuals, who want to profit from music sales.  Even if Tim had given a verbal consent for his songs or music from 40 years ago to be used---the claim made by the president and vp of the now defunct 'source foundation'; the fact that Tim never signed a damn thing with those two should have given them pause from just going ahead and taking and using his music!  It is my belief that some kind of consideration should have been given to Tim's heirs ie his son and me.  But, I am dismissed and labeled by 'the foundation' prez as being, 'the out of touch ex-wife', whom he feels has no claim to Tim's music.  Yet, Tim's own son was also completely sidestepped and circumvented.

What's done is done, yet no restitution of any kind has been allotted or offered to Tim's son without agreeing to sign 'source foundation' contracts in what I saw as a 'friendly form of extortion', until just recently.  In a long overdue and pathetic effort on the part of the president of the source foundation, upon the announcement of the dissolution of his foundation, an accounting was given in the amount of $30.40 to be paid to Tim's son for the sale and use of his Dad's songs and music for all these years, and in what was meant to be a personal and petty dig at me noted that payment was ONLY to be paid to my son (not me)!  Ha ha ha!  So, Tim's son has finally been offered some kind of recompense for the sale and use of his Dad's song on a Yahowa 13 album that has been on sale since the early nineties, while completely omitting any remuneration for Tim's song Every Morning, because the prez of the source foundation admitted to having no knowledge of that being Tim's song; which only goes to prove the disconnect of those who have wanted to profit from all of the music, but who have no idea themselves who wrote what song or who was performing on any of it!  Unbelievable. The photo below was taken at The Father House of Tim singing/performing for the entire group with Jim Baker aka Father Yod behind him. 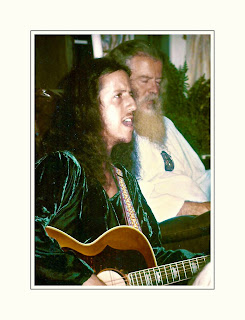 Here is an early recording of Tim singing a song he wrote titled First Song that he performed in the early days of The Brotherhood of The Source.

Another early recording of Tim singing his song Golden Lilac Lady.
Posted by Laura Garon at 9:36 AM