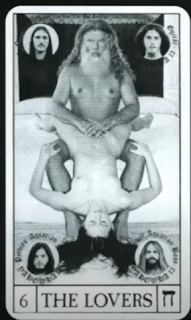 The photo above was one that was to be part of what was to comprise Jim Baker's 'Aquarian Tarot' card deck for The Lovers card.  It was taken at The Father House in Los Angeles, during the flurry of Yahowha 13 recording sessions.

The photo above of a naked Makushla lying prone, while Jim Baker holds a chalice to her mouth was to signify them having performed the sexual ritual called qudosh that Baker initiated into the daily practice of The Source Family and became THE most predominate of his supposed 'new age' teachings.  Qudosh was something that Baker adopted, after reading books by Aleister Crowley and The Golden Dawn.  The practice of qudosh has been the most secretive aspect of The Source Family that the majority of former members have tried to keep hidden from public view, and is also the main reason that many former members have disassociated themselves from having been in The Source Family.  It's my belief, that Jim Baker became consumed by sex and his acquisition of multiple 'spiritual wives', primarily to outdo Yogi Bhajan to show how 'aquarian' Baker was for openly having sex with multiple women, as opposed to the clandestine sexual relationships that Bhajan had with women in his group.  Makushla/Susan, if you happen to see or read this post; I apologize for causing you any more embarrassment, but these two photos are already found online, and so I feel that some kind of explanation should be given so the viewing public can understand how Jim Baker abused his position of power as the spiritual leader and father figure of The Source Family, by expecting everyone especially the women to perform a sexual ritual that honestly few wanted to perform!  But, so-called spiritual leaders, gurus and new age teachers constantly and consistently abused their positions of power and often subjected their loyal and devoted followers to awful practices, including having sex with the spiritual leader, guru or new age teacher.  Jim Baker subjected all of the women (and men) to engage in a sexual ritual which nobody signed up for initially, but we had already become good, little obedient followers of Jim Baker and so most everyone acquiesced and did what he told us to do.  That is the uncomfortable truth of it all.

In a desperate desire by those still promoting Father Yod and The Source Family, a couple of people wanted to publish a Source Family 'Aquarian' Tarot Card deck to hopefully make additional money for themselves, along with all of the other Source Family merch they have for sale.  This was all to take place in 2012, until a mortified Makushla (Susan) set off an email campaign where former members were asked to show their support for her to block the publication of the naked photos of her posing with Jim Baker.  After all, Susan aka Makushla had moved on with her life and was in a new relationship and saw the publication of those naked photos of herself from forty years ago an embarrassing, awful prospect.  I was one of those former members who wrote an email expressing support for Makushla to prevail upon those who were intent on publishing photos of her---basically just pleading with them not to print/publish those embarrassing naked photos of Makushla to be sold in a deck of tarot cards.  The two people most hell-bent on keeping the mythos of Jim Baker alive finally agreed not to publish the naked photos of Susan and Jim Baker, at least until she had passed away; in another display of a humongous sense of entitlement by two former members who have essentially taken and used whatever they have wanted from the Source Family days.  Susan was given a deference that no other former Source Family member has been given, because she was seen as being Father Yod's 'Mother Angel' to be treated in an honorific and reverential way, in contrast to Robin Baker:  Jim Baker's only legal wife who chose to remain with Baker in The Source Family and witnessed and experienced her husband shift his focus and attention to Susan, along with Baker's ongoing and continual sexual acts with the majority of other women within the group in what to me seemed to be his obsessive desire or need to engage in sex with as many of the women in The Source Family, as he possibly could.  Around the same time that Baker summoned me to have sex with him at The Father House, I also recall a beautiful, young blond woman joining and Jim Baker couldn't help himself and of course initiated having sex with the young woman; when word quickly spread that during the sexual conquest of the young woman; Baker 'lost his seed' ie ejaculated; even though his designated practice called 'dhyanism' was specifically about a man not ejaculating.  Clearly, Jim Baker's lust for the young woman got the better of him that day.  No relationship was respected or sacrosanct to Jim Baker, if his desire was to have sex with another man's wife or partner and it was all presented as being very 'aquarian' and how women were supposedly just naturally attracted to him, because he was 'the most powerful' of men (Jim Baker was much older than most of us who joined and he had a big stomach and flaccid arms and was certainly not as virile and physically fit as most of the younger men in the group and I never found him physically attractive), and how he was supposedly elevating the act of sex beyond the carnal, lustful act of sex outside the confines of The Source Family.  Yet, another uncomfortable truth is that Jim Baker was 'a dirty old man on a lust trip', as described by Robin Baker in the 2012 film about The Source Family.

The above photos also reflect the male dominated environment of The Source Family where Makushla is seen posed vulnerable and naked upside down in a compromised, sexual position with Jim Baker seen as being the masculine dominant male above her.  Jim Baker was born in 1922 at a time when women had barely won the right to vote in a very male dominated society, and so he grew up seeing women as being subservient and compliant to men more than anything else; the weaker sex who could not withstand the vicissitudes of life which was the reason/excuse he used for keeping the women in The Source Family sequestered away and protected from having to deal with the big, bad outside world.  I recall Jim Baker saying that women were not emotionally equipped to deal with 'the outside world' and therefore should be protected within the confines of the group.  Which was why a woman's role in The Source Family was all about bearing and raising children, cleaning, making meals, doing laundry and attending to the 'earth trip' of their designated "God man" which was how Jim Baker described his 'sons' or the men surrounding him.  So, a woman's role within The Source Family was created by Jim Baker according to how he saw a woman's role in life, which was subservient, obedient and compliant to a man.  I distinctly recall Jim Baker saying that women didn't even need to meditate or attain 'spiritual enlightenment', because their path was different and that it was a man's role to 'contemplate Spirit' and attain a higher consciousness or God-consciousness.  That was the belief system which Jim Baker put into place within the supposedly new age 'aquarian tribe' of people whom he surrounded himself.