All of the songs that were ever recorded, during the Source Family had one thing in common, and that was they all had the same drummer---Octavius performed on every one.  Although, Octavius wasn't just the drummer; he was also a producer and engineer.  I recently asked Chris Johnson (aka Octavius), if he would write something about the music from The Source Family to post on my blog and here is what he wrote:


Hello, I'm Octavius Aquarian.
I would like to share some memories of being the drummer for The Source Family music journey presenting highlights of the evolution of the music and the phases of its development. I will avoid the emotional interactions of the many people involved. I have been known to be sarcastic and opinionated, so please bear with me and I will try to lay out the meandering journey of music, minds, and melodies.  Because of the things that ego’s madmen, and visionaries bring to our lives....some names and places have been left out, to protect the not-so-innocent from getting their togas and drawstring pants in a bunch.

I walked away from a job in Vegas playing for good money, room and board---to the Source Restaurant for no money or room, but I was never bored.
I walked away from the drums when I joined The Brotherhood of The Source. No one knew that I played drums, but sooner than later it was found out that I was a musician.

There was of course as in any group of people, hidden talents never before realized.
There was a member who was a very talented singer/songwriter named Lotus.  I would play bongos with her (laughing), because I no longer had a drum kit.
There was another member who was also a singer/songwriter at that time named Aladdin, who was a gifted musician.
There was a member who was a bass player of some repute in Hollywood in those days who was hiding out being a talented jeweler in the group.
There was a member who played keyboard and his name was Magus.
Another songwriter joined, as well who had previously been writing jingles and such; he also wrote some wonderful songs.
The group had enough talent to hobble together a musical distraction.
Artist and thinkers are the troublemakers. It's not only smart, but necessary to have these kinds of people busy doing things that keep them occupied----lest they start asking questions.  At least that is what music does to me, and it was all I was in those days....all I thought about.  It was my persona---that Jesus was a drummer kind of thing.
That is when the leader says to me, "I have a drummer, I have a band.”
I thought, Oh yay or was that Oy vey!

Well the floodgates were opened. Our spiritual sugar daddy/producer/leader told me to get instruments and outfit a band.  Can you say 'gift horse'?  Guitar Center here we come in our robes and long hair waving cash around, so as to be taken seriously.

All the people who could do anything showed up for an audition at some point or another.  It surprises me how evaluating ourselves can sometimes be so skewed.  As I remember, it was nerve-racking at times a bit like the Gong Show.  I was designated to be the executioner of musical egos.  After purchasing recording equipment, building a studio area and sound booth; we recorded our first album.
Aladdin was never part of the wannabe crowd.

Most all the songwriters and singers made up our 1st musical level.
From there we focused on the individuals who had more than one song.
Arranging and making them band-worthy.  We were having a good time playing the rehearsed music.
So much so, we even managed a gig at the Whiskey a Go Go on Sunset. It was The Tubes night off.  It was the only gig we had.

As I recall, there were 13 people in the band named "Spirit of Seventy Six” - the 2nd musical effort.
It was during rehearsal days, when the leader of our group started to hang out in the band room.
He did not have a singing voice.
He did not play an instrument.
He wasn’t going to take no for an answer.
He bought a timpani drum to play along!!!!!!
We didn’t have any material that called for timpani drum.
So, he would start playing by himself and we could join in!!
It was less difficult for me at the beginning....both being percussion.
Unfortunately, he didn’t have timing either.
Everyone faked (whatever) the best they could.
Since the guitar player had never really played electric, he made strange sounds with it like squealing and scratching with wha-wha and echo through a B3 cabinet twirling horns vibrato.
He fit right in.
We just kept playing hoping it would end without a scene of freak out or storming off.
That's when our leader said how fantastic that it was.
We had just had our first taste of YaHoWa 13 spontaneous music - the 3rd musical effort.
This is what we presented as our contribution to the music palate of Hollywood in the 70’s.
This spontaneity continued till in the end we had a band member change up.
I observed that the guitar and the sounds made were pushing to dominate and control with no way out.
I went to the leader and said, "Either he goes or I go."
The next day we switched things up and played some music with Arelich (Sky Saxon) and Fire Water Air - the 4th musical effort.
With a different guitar player. Those were in the last days of YHV13 in Hollywood.
We made many albums. Others even took the music and redistributed it.  There was even a book about the family, and a music tour for a couple of years 2012-ish, and a documentary movie.  The spontaneous music is what we were known for.

There was also a star in the beginning that continued doing what he always did....sing and play his music, but Aladdin now had a new name Hom (pronounced home).  When YHV13 was not making a splash anymore, Hom's music came to the front.
We put together a band called BREATH and made some great music - the 5th musical effort.
We presented a demo to A&M records. They liked it. They wanted to give us a contract.
As things go, we were not to take their offer. In retrospect, its obvious our leader was selling the family package not the music.
If the musicians were to sign, they would leave the community. Then what would the group do without their music and their band.
Breath did a few gigs in the last days. We opened for Bread at the Hawaiian International Convention Center, and the Crater Festival in 1976 on New Year's Day in Honolulu Hawaii.
Breath was the most commercial, and relatable music the Source Family ever made.
Short and sweet.
Well, thanks.
Making sure the stories remain true.
Octavius
Chris Johnson 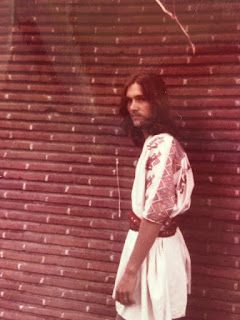 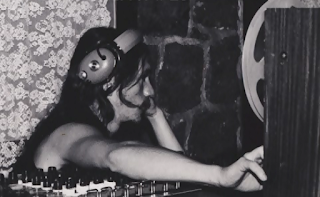