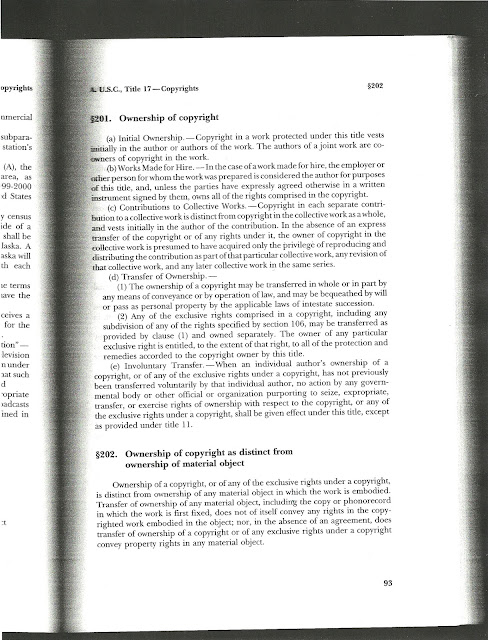 I met with a lawyer last week who specialized in music copyright law, where I obtained the above copy of the copyright law under section 202 which applies to all of the albums that were produced at The Father House circa 1973-74; who informed me that 'possession of a tape or recording does not automatically transfer any copyrights to the songs or material', which was 'music to my ears', especially since so many other people have felt they have the right to enter into agreements to license, distribute and sell albums that were produced while The Source Family was in existence; in order to make a profit for themselves from albums which contain original songs written and performed by a few of the individuals who were in 'the family' at the time!  Copyright Law reads that as soon as a person's song is recorded on to tape, it automatically conveys copyright of that song to the individual who wrote and performed that song; not to any individual who comes into possession of the 'object' ie album or tape.  Per the copyright law of this country, simply having recordings or tapes in ones possession does not convey any 'rights' to the songs on that medium; especially where no signed contract or agreement has been put into place.  The albums that are being marketed and sold labeled as 'Source Family Music' are in reality albums where no 'mechanical' license or agreements were EVER put into place; until not long after a 'box set' of all the albums was released where a couple of former family members appointed themselves as 'president' and 'vice president' of their recently (supposedly) dissolved 'source foundation' were able to inveigle a couple of the individual songwriters/musicians into signing over their 'rights' to the two people heading the 'source foundation' giving said 'president' and 'vice-president' the rights to sell and license their original songs or performances; but these 'source foundation' agreements were not all-inclusive, because a couple of the songwriters and musicians refused to sign anything!  Yet, somehow these same two individuals felt that conveyed to them the 'rights' to sell and license ALL the songs contained on all of the albums produced circa 1973-74.  But, several of the songwriters and musicians who contributed to the albums produced back in and around 1974 at The Father House in Los Angeles, never signed one of these 'source foundation' contracts, or any licensing agreements with any of the parties who continue to sell what are called 'source family' albums!  In my mind, it has all been a huge copyright infringement; because of the attitudes of entitlement exhibited by a few individuals who believed they could make money from the sale of the music made by individuals other than themselves who they shared space with while being in The Source Family over forty years ago.  I believe that once and for all, the inherent copyrights of each individual's songs and/or performances need to be looked at closely and examined, and administered to correctly where legal licensing agreements are put into place with either the artist themselves, or with their respective heirs, if that artist is deceased; rather than anymore of the continued wholesale sales of albums being marketed and sold as 'Source Family Music'.  Anyone currently selling albums under the banner name of 'Source Family Music'; people who believe they have carte blanche permission to distribute and sell albums which contain original songs written and performed by actual individuals really should investigate and take a closer look, rather than just accepting the belief that all of the songs were 'made by the group' which somehow invalidates the claims of any individual songwriter, singer or musician; any persons who are presently involved with the sales of any of the albums that were produced during the brief period of time at the Father House in Los Angeles circa 1974 really need to determine whether or not they actually have licensing agreements in place with all of the individual songwriters whose songs are featured on those albums, rather than just taking the word of a couple of individuals who have wanted to profit from the sales of the music, and who have also presented themselves as being 'representatives' of the individual songwriters and musicians.  Because in the 'real' world, an individual artist/songwriter is acknowledged and compensated for the use of any of their songs.  None of the original songs on ANY of the albums being marketed and sold as 'Source Family Music' belong to ANYONE but the person(s) who wrote the songs!  But, a very bad precedent was set back in the nineties when Sky Saxon and another former family member took it upon themselves to enter into a deal with a Japanese record label to release a 'box set' of all of the albums that had been made during 'the family'; a deal which netted them both thousands of dollars; but where nothing was paid to any of the individual songwriters or musicians who performed on the albums in this 'box set'; I believe this action set into motion what I see as a continued 'pleasant form' of piracy where other former 'Source Family' members saw an opportunity for themselves to also profit off music which they had nothing whatsoever to do with!  It is my belief, that it is long overdue that things are put right in the continued licensing and sales of original songs contained on all of the albums deemed as 'Source Family Music', along with the correct recognition given to the individual songwriters, singers and musicians of those albums.

**Some people have been under the impression that since none of the songs recorded back in 1973-74 were copyrighted at the time through the US Copyright Office, that it meant those songs fell into 'public domain' which per the attached article 'Orphan Works' states otherwise: "Under current copyright law, if you make a recording, that work is automatically protected from the moment of its creation until 70 years after your death.  If you sign a record label contract in which your copyrights are transferred to the label (which is the typically the case), the record label owns your copyrights for the term of life + 70 years, if you do not exercise your termination rights. If someone else wanted to license or re-release your recording during that time, he/she would need to identify and locate you – or your record label – to ask permission. After the life +70 years term, your work moves into the public domain, in which no permission is needed to use your work."
" https://futureofmusic.org/article/fact-sheet/orphan-works


Here is another site that addresses what falls into public domain, which states the following: "It is important to emphasize that copyright protection is not the only form of legal protection for creative works. Although a work may be in the public domain for copyright purposes, rights to the material may be protected under various legal theories such as trademark or unfair competition laws (which protect against confusingly similar usage by another); an individual’s right of privacy (the right to be left alone); or a person’s right of publicity (an individual’s exclusive right to benefit commercially from his or her name, voice, photograph or likeness)." http://www.copylaw.com/new_articles/PublicDomain.html
Posted by Laura Garon at 7:43 AM